Big Data will leave no sector untouched as it continues to change the way we think about everything from sales to human resources, and medicine and healthcare are no different.

For years, the basis of most medical research and discovery has been the collection and analysis of data: who gets sick, how they get sick and why.

But now, with sensors in every Smartphone and doctors able to share information across disciplines, the quantity and quality of the data available is greater than ever before, which means that the potential for breakthroughs and change is growing just as exponentially.

We humans are notoriously terrible about preventing problems – we’re much more motivated to treat them after they appear. But healthcare providers know that the old adage “an ounce of prevention is worth a pound of cure” is true.

Smartphones and other popular smart devices including Jawbone, Fitbit and others, now have the capacity to help people track their progress towards a healthier lifestyle. Apps and devices to help track and monitor physical fitness but also chronic ailments like diabetes, Parkinson’s and heart disease are also being developed.

Researchers are beginning to compile this information into incredibly useful databases that could be game changers in understanding the intersection of lifestyle and disease. The problem with many medical studies is that patient behaviors are self-reported, and there’s a well known psychological phenomenon wherein participants fudge their own data to make themselves look better.

But with smart phones and other devices, the device can impartially record and transmit the actual data — steps walked, heart rate, etc. – and the patient’s ego or opinions never enter into the equation providing more and more accurate data for researchers than ever before.

The next logical step, then is giving doctors access to this trove of patient information.

The medical industry already collects a huge amount of data, but it’s often siloed in individual doctors’ offices, hospitals, and clinics. Unifying that data – and combining it with patient-collected data from smart devices — is the industry’s next big hurdle to overcome.

Healthcare providers are already focusing on digitizing patient records and ensuring access to one set of records across the healthcare system. For example, Kaiser Permanente has created a program called Health Connect that unifies health records across its system, and the program is already credited with a $1 billion reduction in costs across the system.

The Pittsburgh Health Data Alliance aims to compile data from various sources (including medical and insurance records, wearable sensors, genetic data and even social media use) to draw a comprehensive picture of the patient as an individual, and then offer a tailored healthcare package. I predict that more and more services like this will emerge in the future.

In addition, programs like IBM’s Watson are being applied as pattern recognition programs to diagnostics. So far, algorithms with machine learning capabilities are proving as effective or more effective than human diagnosticians in spotting cancers in test results. The potential here is incredible for catching more diseases at earlier stages, and thus increasing the likelihood of treatment success.

IBM’s Watson and other deep learning algorithms have already proven successful at “reading” and analyzing huge quantities of text. IBM is working to produce an interface that would allow Watson (or a program like it) to analyze the existing medical research on any given topic and then synthesize and summaries the information for the doctor. The result is that the doctor will be able to make the best treatment choices for an individual patient based on the vast amounts of data available – without having to spend hours doing the research himself.

It’s likely that the medicines and treatments the doctor would then prescribe were also developed with the aid of Big Data. Data on applicants helps researchers choose the best subjects for clinical trials, and algorithms help them analyze the results. Recently, data-sharing arrangements between the pharmaceutical giants has led to breakthroughs such as the discovery that Desipramine, commonly used as an anti-depressant, has potential uses in curing types of lung cancer.

In the near future, the doctor might also choose to use personalized medicine as a treatment option, which involves tailoring medicines to a person’s unique genetic makeup. It is developed by integrating a person’s genetic blueprint and data on their lifestyle and environment, then comparing it alongside thousands of others to predict illness and determine the best treatment.

Big Data is also being used to track, analyze and treat epidemics across the world, including Ebola and Zika.

Data, deep learning, and robotics come together especially when it comes to follow-up, long-term care, and preventing relapses and readmissions.

Big Data has been used to predict which patients are most likely to follow their doctor’s advice – and which aren’t – to help prevent hospital readmissions in the most vulnerable patients.

Apps are being developed that can track when a patient takes his or her medication – like GPS enabled inhalers for asthmatics. Others record information about calls, texts, physical location, movement and sleep patterns that can help alert doctors or family members if the patient is likely feeling unwell (poor sleep, lack of movement) or even in danger of an anxiety or other psychological attack.

Because of a rapidly aging population, the Japanese in particular are at the forefront of combining advanced robotics with care giving and treatment. Robots can be used for everything from monitoring elderly patients who live alone, to helping doctors provide care from a distance to rural patients, to even robotic pets that help calm and soothe dementia and Alzheimer’s patients.

The potential to improve patient outcomes, understand disease – even cure cancer – all seem just around the corner with these advances in the quantity and quality of the data we collect along with the computing power to analyze and understand it.

Amidst this lockdown, many are still asking the question about “Social Distancing”. As per the scientists, finding the cure or medicine for COVID-19 it may take about 12-18 months to find it. Hence. To prevent the spreading of this virus social distancing is the most effective way to do it.

Let's start by explaining what is social distancing, it is a conscious and deliberate choice of maintaining the distance of six feet from the people around us, to prevent the spreading of COVID-19.

To understand better the impact of it, here is a small visual to explain how the virus will spread if social distancing is not paid attention. 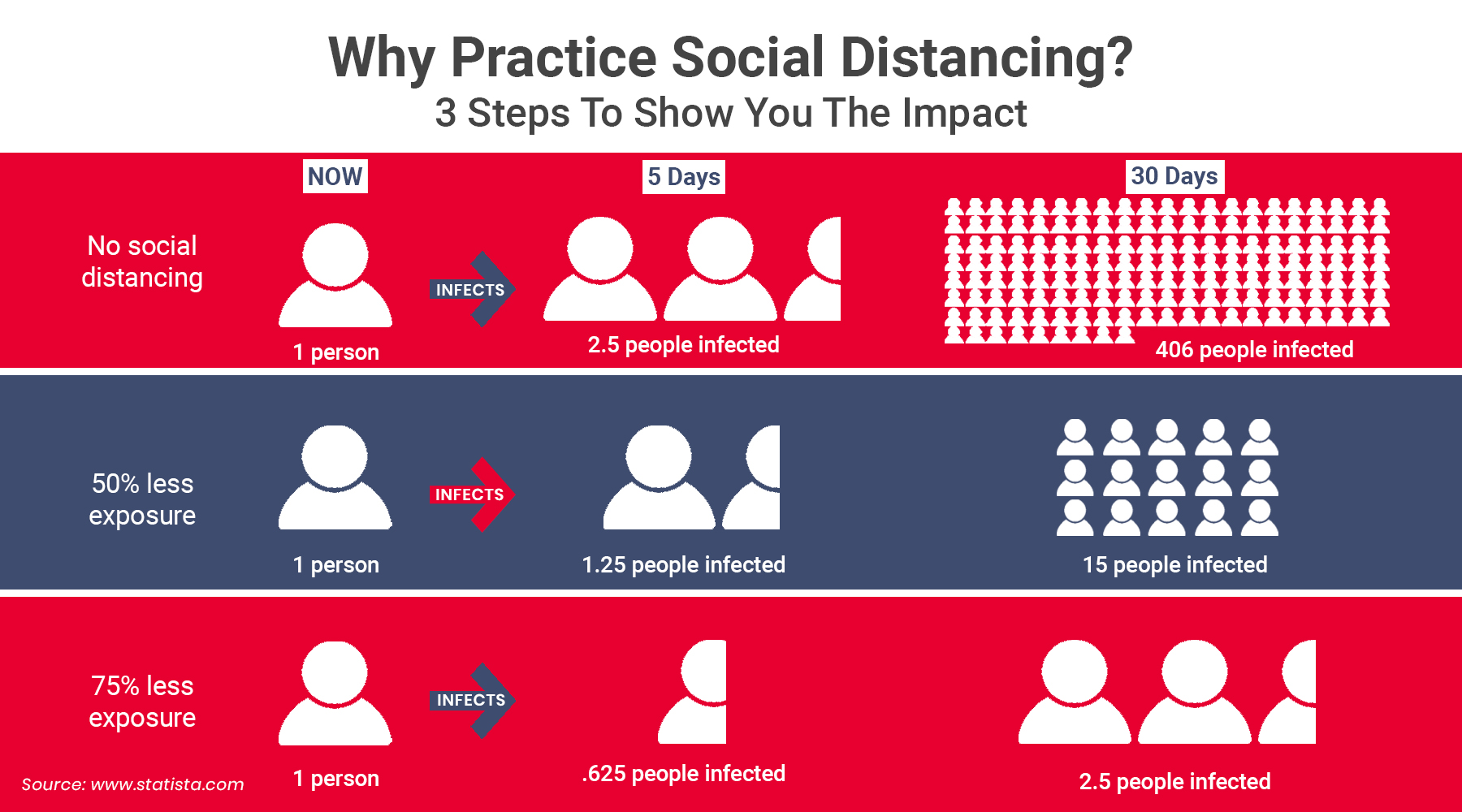 Social distancing is so effective right now that as an individual we all are contributing in the prevention of spreading this deadly virus.

There is another major concern that is coming into the picture with the rapid increase in the coronavirus patients. Hospitals around the world do not have enough resources to tackle this pandemic, there are limited numbers of healthcare facility in all the countries around the world.

The coronavirus outbreak in Italy has shown, the faster rate of the population getting infected by it and to tackle with it, there are not enough medical resources like hospital beds, ventilators and doctors. This will be challenging for the healthcare to save lives leading to exponential rise in number of deaths.

Hence, social distancing is the most effective way to "flatten the curve" or reduce the spread of this coronavirus.

What does flattening the curve means?

The researchers have projected a graph to understand the impact of the spreading of coronavirus against the number of hospital beds. Though this is a theoretical graph, it does show how quickly the capacity of healthcare can come crashing down which can make COVID-19 an epidemic, hard to deal with.

This curve indicates, if the same number of people are getting at a slower rate over a longer period of time, then it reduces the pressure on the healthcare system and making it easier to treat everyone, hence, a lesser number of deaths.

Therefore, just by taking small measures individually, like maintaining social distance, washing hands frequently, avoid going out in crowded places, and spend maximum time inside the house. We all can contribute a collective to fight against this deadly coronavirus.